Coffee, Tea and the Millennium Trilogy 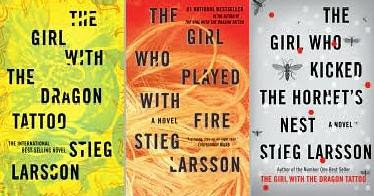 Sweden drinks too much coffee, I've deciphered from Stieg Larsson’s Millennium Trilogy.
“Hello there! I need to ask you some important questions.”
“Coffee?”
“Please.”
“Hello there!  Let’s sit in this conference room until we come up with a concrete plan to crack this conspiracy wide open. It could take 8-12 hours. Let’s not worry about food or anything but…”
“Coffee?”
“Please.”
“Hello there! It’s midnight and I know these people in the apartment across you have just been killed but…”
“Coffee?”
“Yes please.”
The characters never turn down an offer for coffee. It’s like they prioritise it above everything else. It seems to be drilled into their social genome which is why an explanation -- how do they sleep at night? — isn’t deemed necessary in any of the books. Not a single event takes place without the mention of coffee and occasionally sandwiches. So much so that I smelled hot chocolate mocha during the happier parts and strong machine brewed mush during the tense moments.
But all in all, wasn’t it a spectacular series? I didn’t care much for the third book – everything just fell into place very conveniently, didn’t it? But the first two books had my heart racing and it had nothing to do with an excessive intake of caffeinated drinks.
I loved how The Girl With the Dragon Tattoo set the premise for what’s to follow – Blomkvist, ladies man and a total fool when it comes to physically defending himself and those around him. He even has to be saved every once in a while. Good thing he’s a good at investigative journalism/ detective work and even better than he’s backed up by the most influential independent magazine in Sweden. Lisbeth Salandar, she came alive in my mind. With her gift for breaking into computers and beyond, I couldn’t help but place her in the same league as superheroes like Spidey, Mr Incredible and Iran Man.
The Girl Who Played With Fire gave me reason to wake up every morning and take the train to work – the hour between home and Nariman Point has done wonders for my reading. It’s when the action takes place and the story unfolds. It’s also when Salandar is at her strongest and yet most vulnerable, as she fights her way out of sticky spots, manipulates her powers to survive and realises, during the last few pages, that she is human after all.
The Girl Who Kicked the Hornet’s Nest had promise. I was expecting a long-drawn out trial that broke headlines in Sweden, created chaos and saw a lot of bloodshed. The Section’s attempts at damage control should have caused a lot more trouble, and put everyone’s lives, jobs and minds in jeopardy. But then something unexpected happened.
You know when you’re reading a suspense thriller and you’re like “Oh no! Don’t do that.” “Don’t go in there.” “Please don’t let anything happen to him.” It’s like Larsson preempted this perfectly normal reaction from his readers and ensured that we got just what we asked for. We all know that justice and all that jazz will prevail in 9 out of 10 scenarios. But in this book, not only did justice prevail, but the bad guys also got their just desserts well before the book ended. All the pieces of the puzzles fell into place, Blomkvist became an authority and even the Prime Minister took a special interest. This is where my disappointment stemmed from.
Overall, I think Larsson did a spanking job with the Trilogy. It is well presented, just like a really long investigative feature that you can’t stop reading. But more importantly, it introduces two characters – Kalle Blomkvist and Salander – epic in every form and function who have broken out of the boundaries of Nordic fiction and given suspense writers a higher standard to reach and a wider palate with which to create.
Buy the Millennium Trilogy from Flipkart here and from Amazon here.
Posted by Afsha Khan Jayapal at 12:31:00 PM

Email ThisBlogThis!Share to TwitterShare to FacebookShare to Pinterest
Tags: Chat and Chai, Millenium Trilogy, Stieg Larsson, The Girl Who Kicked The Hornet's Nest, The Girl who Played with Fire, The Girl With the Dragon Tattoo