Review | Interview with the Vampire by Anne Rice 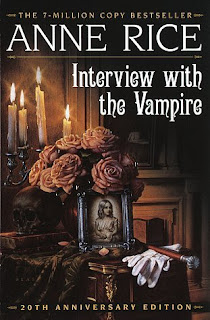 If you’re well versed in contemporary vampire fiction (read tv shows and movies) Interview With The Vampire by Anne Rice is bound to grate on your nerves.

“How can Louis possibly not know how to kill a vampire?” He must be stupid.

“Why is he so easy to overpower – physically and psychologically?” What a f^#king p#*sy!!!

What is Lestat’s deal, really, what is it? He’s a mad man of leisure.

And for the first 150 pages of the book – where are the other vampires in the story? The originals? The hunters? The shiny ones?

It couldn’t be more obvious that Interview with the Vampire, now a seriously popular movie starring Brad Pitt and Tom Cruise, is a bridge between the commercial vampire fiction of Bram Stoker’s Dracula and LJ Smith’s The Vampire Diaries. Lois, the heir to Point Du Lac in New Orleans reveals in a book-long interview to a character known only as “the boy” that he was turned in the 1700s by a vampire called Lestat who wanted access to his fortune. For some reason that isn’t quite apparent, our lovely Lois does so, despite being at the point of suicide at the time, and also comes into the latter’s control for the next couple of years. They find Claudia, a young orphan whom they turn and take in as their daughter. And if the homoerotic undercurrents aren’t strong enough, the Freudian one’s do come into force when Claudia, upon turning into a woman in a child’s body, attempts to murder Lestat (guess he was the mother in the relationship), which goes awry. You see, Lestat’s ploy to exert his power wholly upon the two comprised of his never telling them the essentials of things they need to know such as – how he turned them, how immortal vampires could be killed and other gifts they might have as prisoners of the night.

So yes, it does break convention from myths, hints of which were presented in Dracula with the garlic and the crucifix, both of which our trio isn’t affected. But it doesn’t stray into the more fascinating vampire lore like The Vampire Diaries which presents an array of theories, two of the most interesting ones find them compelling their victims and the healing power of their blood. But what it lacks in these areas, it makes up in its psychological analyses of human nature extended into the world of the undead.

Louis would much rather live on animal blood than kill people because 100 years on he still finds it morally complex to end a human life. Claudia is influenced in equal measure by her polar opposite “fathers”, kind and cultured Louis and the dark and inhuman Lestat. The child vamp imbibes characteristics of them both depending on whom she’s manipulating that day. To Louis’ disadvantage, disdain and discredit, these tactics are always played out on him. There’s always a shudder to be felt when you see him getting pushed around, used for his fortune and pretty much beaten to the ground even after he’s rid of Lestat.

For those of us entranced by vampire fiction – by which I mean not in possession of a handbag that reads “I (heart) Edward Cullen” and the like – Anne Rice’s Interview with the Vampire is an important read to understand the progression of genre from the dark ages of monsters and bats to the pretty boys making for bubblegum romance on television. Be warned though, it dark, deep and gritty. You may never be able to look at a rat on shore or ship without picturing Lestat piercing its body and pouring its blood into a glass of wine. Or for that matter looking at a glass of wine and … you get the picture.

Buy Interview with the Vampire by Anne Rice from Flipkart (India only) and Amazon.com (US).