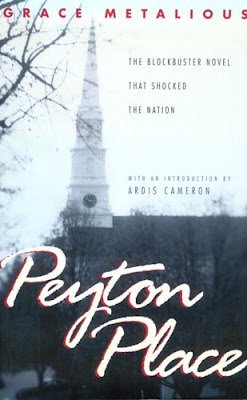 "The blockbuster novel that shocked the nation" is the blurb on the book cover. As a teenager, the title was bandied about by my mother but I could never get my hands on it. It lay there on the top shelf out of reach along with the Valley of the Dolls. As my reading habits matured, it drifted in and out of my reading lists; the idea of reading about small town politics in the 1940's slowly move down past Jacqueline Susan and PD James (How dare she utter both authors in the same sentence, blasphemy!)

And fifty pages in, I was sorely dissapointed. Not a flicker of a fu*k or a drop of an orgasm. How this book shocked America was beyond me but I am a tenacious reader and so persisted and finally- somewhere towards the middle, I began to understand what a clever clever lady Grace Metalious really was.

The novel is set in small town USA that you and I have no relation to. This is not the America we are familiar with; the accents are strange. But the attitudes sound familiar and it sounds pretty. She paints us a grim picture in the first hundred pages or so. We are introduced to Allison the dreamer and her prude of a mother, Selena the gorgeous and her white trash family. We learn of the influential and the puritanical and we don't like it. Peyton place seems like a terrible place to live in. Then the girls get their periods and start to grow up. Soon there are hints of child abuse and terrible parenting all leading to disastrous consequences. It crescendoes to the inevitable when Selena realizes that she has grown up too much for her own good and pays the price of being too beautiful. Metalious writes in such a matter of fact tone- passing no judgement and taking no sides that you fell you're outside looking in at a little play.

Time goes on and these characters grow up and they grow more self aware. There is the hint of the Takur mentality, where the landowners son can do as he pleases. If it had been a little less shocking, it would have made a fantastic Bollywood film. You see children's lives being destroyed in front of your eyes, years of trauma leading to mental instability; enemas as a way to control a son and incest as a way to control a daughter. You see the underlying sexual tension in every page, it reeks of it-this puritanical town. And oh my lord it shocks you to the very bone, to this day, that so many things happen behind closed doors. Metalious writes as if possessed, ripping the shiny veneer off small town hypocrisy by showcasing bigotry, lack of religious tolerance, and the complete destruction of a society. Take the Carter's for instance. What seems like a perfect family- lovely home with a picket fence and  two hardworking people who have nurtured a champion son, is soon transformed by backstory showing us what really lies beneath it all. And finally when you think, something good is still plausible, she tells us that the apple never falls too far from the tree.

She discusses abortion and teenage pregnancy in 1953 and that in itself must have caused such a furor. With so much jealously and hate, you wonder if this small town will ever redeem itself and it's finally given a chance. Most people get their just desserts and you walk away still thinking- my lord that's a pretty shitty place to live in but it's probably exactly the way my small town is.

Her prose is evocative, especially because of her personification of nature. Indian summer is a feisty woman, winter an old crone. At times, it's a little fanciful and I admit to skipping a few pages of the story as the plot loses its way. But the book is not erotica, not in any sense. It does not make you feel sensual, which is what I believe erotica should be. But the book is about sex. It is about the freedom, the power and the role of sex in our societies, that how we see it determines who we become.

Some facts about Peyton Place

A little bit about Revival. We read what we want here at the Caterpillar Cafe and a lot of times these are books that have been out for decades or even centuries and are classics- Dracula, Dante's The Divine Comedy, Shakespeare. We are reviving them from the dusty shelves and in the process shortening our reading lists a little. Enjoy our revivals!
Posted by Unknown at 3:34:00 PM