'If I hear one more mention of that goddamned book...' I said to myself the other day. And then Firdaus Variava meets me at a party and says, 'What's the deal with that Anastasia chick anyway?', making me backtrack at the faint whiff of opportunity. 'Why don't you review it for us? From a man's...' And just like that he was gone. Judging by the fact that I received this in my mailbox just a few days later, I'm guessing he zipped home, got down and (hopefully) dirty. Thank you Fido, for a man's perspective of Fifty Shades of Gray. (Readers: This is the last time we dedicate any space to the book. Promise!) 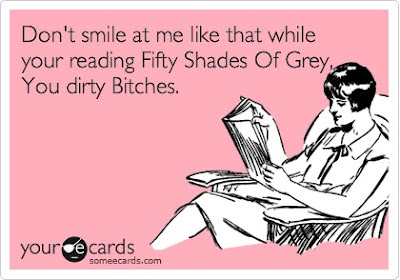 There was once a girl – we don’t know if she’s particularly hot, or if she has big boobs, because the author has clearly not written this book with the gruffer sex in mind – who falls in love with what could be considered the ideal man. He is gorgeous looking, obscenely rich, generous with said money, and loves her to bits. Only problem is, he likes to have sex in unusual and inventive ways.

As a man, I was saying uh huh..nuthin wrong with dat. If you have the imagination, go for it amiright? As long as you treat the girl nice and stuff, she should be over the moon with this added feature of the relationship.
Nuh-uh! Not this girl. She keeps going on about dragging her lover from his dark place into the light, trying to bring him to her version of “normal”. Her version of normal relationships includes roses, romance, candlelit dinners and all that Mills and Boons stuff. She gets most of that from this poor fellow, but she just can’t wrap her head around the kinky sex.  Which, by the way isn’t really that kinky. It’s like, stuff your mother would find kinky. Or maybe your grandmother. There is a red room of pain, but most of the implements seem to be there only for decoration. Only some really tame stuff gets used.

So anyways, after unsuccessfully trying to change him, she dumps him. The end.

This whole novel has the sort of morality that only a repressed middle aged woman could come up with. It’s also filled with the sort of trite nonsense that used to pass for spiritual talk in the 70’s like - “her inner goddess” and “her subconscious”.

Oh puh-lease woman..we are so beyond that sh*t now.

By the end of it you just wish that Anastasia Steele would get her head out of her ass and see that this guy is the best thing that could happen to her. The constant drama, pathetic attempts to inject emotion into the whole thing, coupled with said tame sex scenes (which are numerous, but not very long) finally drive you to start skipping paragraphs in the hope that she will finally come around and there will be a happy ending.
But of course, the only conceivable happy ending would be if the publisher or author called me up personally, apologised, and returned the Rs. 250 that I spent on this book!

When Fido isn't reading women's erotica, he loves playing video games at work and spending time with his beautiful children whose shenanigans he records (sometimes) on his blog, Delirious Daddy