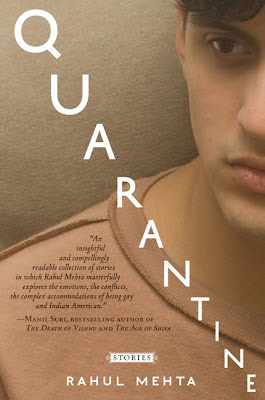 It’s refreshing to finally have a book of gay short stories that doesn’t deal with issues such as closets, homophobia and since Rahul Mehta’s Quarantine features Indo-American voices -- displacement and identity crisis. The protagonists in all nine stories are openly gay and comfortably so. They also happen to be young Indian Americans who are creative in one way or another, aspiring to be writers, supported by parents accepting of them not becoming doctors, engineers or academics.

Quarantine, the short story after which the novel is named, features a man who is still bitter towards his grandfather for being ungrateful and insensitive to his mother, the only person in the family who takes care of him. The Better Person, brings gender stereotypes – “which one is the ‘woman’” -- and commitment into focus. The Cure has its protagonist burning -- literally – all his money, while Floating is about a couple making a focused effort not to turn tourists getting fleeced, but have it happen to them anyway.

Interesting stories, these. But the book really picks up in the second half with What We Mean in which we meet Parag, a cheeky young man who has a way with words – aah, another writer – and utterly hilarious. He doesn’t bother with little things like learning his neighbour, or her boyfriend’s name, enjoying instead leaving notes like – “Move your car, S’il vous plait,” “Move your car, Silvia Plath,” “Silvia! Silvia! Silvia!”. Then there’s Yours, in which another writer is secretly jealous and mesmerised by his boyfriend’s ex-lover, Antwon. The layers in Mehta’s writing suddenly come through when the three visit Niagara Falls and Antwon asks him if he ever feels the urge to jump over the rails – not to die, but to be free, to know, even for a moment, what it’s like to fly. But somehow, it’s A Better Life that tugs at your heartstrings as Sanj plays up a fantasy in which he’s interning with Vogue, but is really struggling finding the life he wants to live without the fuel that fired his immigrant father’s belly.

Mehta’s book is a fast and easy read. Good enough to knock one or two stories back and forth on those long commutes to work! The language is simple and the prose flows beautifully. The narrators are identifiable with the battles they face – meaning, purpose and feelings of isolation – but there’s still something missing. More depth to the supporting characters? A longer narrative, perhaps? Clearer endings? More attention to detail?

I’m all for short stories. I live for them. It’s a great way to keep up the reading habit without making a big commitment. But somehow, the stories of Quarantine left me wanting more. I wanted to know, for instance, what the narrator’s parents called to say when he returned to from his visit. I also craved a little drama in Yours, maybe a stolen kiss or Antwon jumping into the falls (Antwon gets irritating after a while). These stories are real, though many aspects are also metaphors. Like in The Better Person, you just know that it isn’t about gender roles, but who cleans up when shit hits the fan. Or when the narrator in The Cure reasons that burning $90 than paying the therapist, it’s because he enjoys the misery of watching his privileges burn to ashes.

Quarantine is a refreshing read, a bold contribution to the genre of gay literature. But it leaves you longing for more. I can totally see book clubs having a field day with its symbols and metaphos, having heated debates analysing the psychology. But hopefully, Mehta is spending quality time right now on a longer, full-fledged novel, with a story that has a purpose and cast of supporting characters much more developed than the ones in Quarantine.

This review was written for Gaysi, a website dedicated all things gay and Desi. Check 'em out! They have stories, experiences, fiction and really cheeky podcasts.