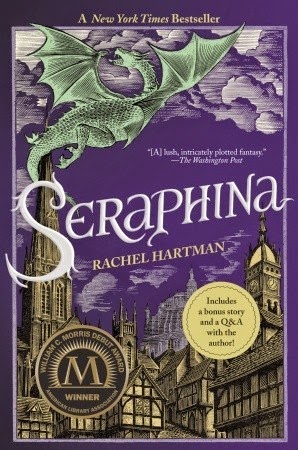 It's also been a while since I felt for a protagonist. Katniss was strong but she never really pulled at my heartstrings; she didn't need me on her side. Sophie from Hex Hall was just plain snarky and let's not even talk about Bella. The kids from  Divergent and I am number 4 are all super hero material. Ride a horse- check. Shoot things- check. Brilliant eyesight- check. Pretty- check. Essentially a counter to Bella whose insipidity single handedly led to the creation of the Super Chick.

Then comes Seraphina. At the outset, she has no super power, well apart from playing an instrument. And two, she's sweet. I know right? Sweet! She's kind and a little shy but that doesn't mean she doesn't have chutzpah, but above all she's intelligent. The book is a high fantasy novel set in the little city of Goredd which is enjoying a time a hard won peace, put in place by a treaty between humans and dragons. Only in this world,  Dragons can take human form- Sarranti.  When we meet Seraphina, there has been a murder in the Royal family and she, a court musician, finds herself, quite abruptly,  right in the middle of it. Seraphina knows a lot about dragons because of Orma, who apart from being my favourite character in the book, is also Seraphina's mentor and closest ally.  The plot revolves around her getting more and more embroiled in finding out who killed the Royal Heir and in the process realising that there is way more to her past than meets the eye.

We have a surprising set of characters which include Prince Lucian- the handsome bastard, who is about to marry the daughter of a cranky but fair Queen. His fiance channels Marie Antoinette thereby acting a the perfect foil for Seraphina. But Orma is my favourite and reminds me of the Vulcans. There's always an little bit of humour hiding behind his seriousness, waving hello.

The book starts off slow, primarily because it's such a strange world and we are dumped into it with no real context. The first three chapters take a little getting used to; the language is mature and languid.  But it's fantastic to see a protagonist who speaks well, doesn't say 'Whatever', is passionate about music and whose mind, to say in the least is, bloody complicated. Rachel Hartman uses an interesting plot device is original albeit clumsy in places and manages to elevate the novel above most other YA fare.  But plot devices aside, the book is filled to the brim with drama and story. There is chemistry and there is sacrifice of the most noble kind. By the time I got to the end I was wiping away tears and clicking on Flipkart to buy the second book in the trilogy, only to find that it's going to be released in 2015! I hate fantasy.

Verdict- Buy if you are a YA fan, you can reread it in a year or donate it to a YA book club.