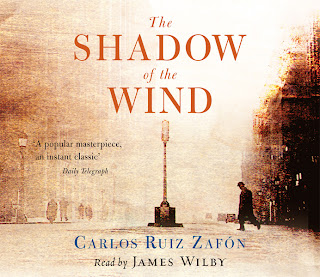 Sorry for going MIA last week. I'm grateful to Reshma for holding the fort around here while I was off reading press releases on tiny-ass stools I had to share with three big bums (mine included). But since I'm back to the grind now, I can't put this off any longer lest my blogging buddy devours my liver for dinner tonight. So here goes...

I didn't discover Carlos Ruiz Zafon. He was sort of bestowed upon me one cold snowy Christmas a few years ago. Little did I know, after reading the synopsis of The Shadow of the Wind, that this Spanish Magic Realist in translation would become one of my favourite authors of all time.

Set in Barcelona after the Spanish Civil War, The Shadow of the Wind is a book within the book written by one Julián Carax. The story captivates the imagination of a young man named Daniel Sempere making him want to find more titles by the author. But this quest turns to dust almost instantly when he finds out that all the titles written by Carax were bought and burned by a mysterious man calling himself Lain Coubert, a character in Carax's novel who is the devil. Not one to give up easily, he uses the priviledge of having a lot of spare time and solves the mystery of Carax's missing books, his untimely death and a sinister secret buried deep in the darkest crevices of Barcelona.

The Shadow of the Wind is Zafon's best novel yet. With great story-telling and plot lines that make it impossible to put down, I recall finishing the book and then starting it again almost instantly. A great first sign. But not for long.

The thing is all of Zafon's books follow a similar pattern - the protagonists are young men, neither too rich nor poor, who come across a cloaked stranger giving them the heebie-jeebies. Throw in some strong and appealing female characters and a mystery that keeps you hooked until the end only because no one is willing to tell the whole truth without resorting to lying, and you have a plot that's not predictable, but not entirely original either. 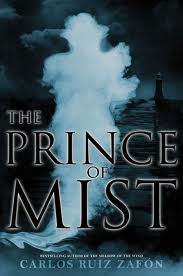 The Angel's Game, a book I swept through shelves to find, disappointed me beyond belief. The Prince of Mist, managed to give me a sleepless night of watching the cupboard, but riddled itself with flaws in the end (in it's defense, it is a "horror young adult" novel). A preview of The Midnight Palace, another young adult novel most recently translated, was delivered to me via a Kindle. The monotony, quite like his previous works, almost killed me.

But Zafon is still my favourite writer. You have to admit - he has style and he has imagination, two very important traits of any good story-teller. What's more is that of all the authors of magic realism, he's the easiest to breeze through.

His prose is lyrical, almost poetic with something fatalistic about it. "He would always remember..." "... the first sparks of an electric storm crackled across the sky like a string of bright lights."

Unlike Gabriel Garcia Marquez, his stories don't ride into numerous decades, introducing a wide variety of characters you have trouble remembering. Unlike Rushdie, he uses shorter sentences. And unlike Murakami, his stories don't sound like adventures on acid. Zafon keeps it simple by limiting the number of primary characters and exploring a form of magic that's as familiar, yet unnerving as a carnival of characters.

He isn't the best in the genre though, considering he's dabbling in a form of story-telling where imagination is the limit. But he's my go-to guy. A sort of comforter I revisit every time I'm ill or sad. His prose makes for good friend to turn to when you want to forget, if only for just a minute.

I lost The Shadow of the Wind (my greatest regret to date). The Angel's Game and The Prince of Mist are up for grabs though, so feel free to get in touch.

Email ThisBlogThis!Share to TwitterShare to FacebookShare to Pinterest
Tags: Afsha Khan, Books we love, Carlos Ruiz Zafon, Magic Realism, The Angel's Game, The Prince of Mist, The Shadow of the Wind