Books that make you go Hmmm... | A Dance with Dragons 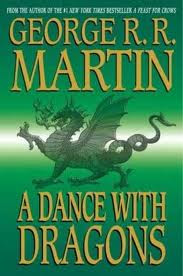 I am sad. The book I waited five years to read just finished and what an ending it was. As always Martin hooked me by the navel before it ended but now I am back to waiting.

The reading world is divided into normal readers and fantasy readers. Normal readers walk into book shops or scroll down the NY times list when they want to read find something to read. Fantasy readers have already penned down the release dates of when their favorite book is about to be published. Normal readers read stand alone novels and often let go, daunted by the size or number of volumes that follow. Fantasy book readers believe the bigger the better, the longer, just more to devour. Normal people are wondering, why George R R Martin's  "A Dance with Dragons" reached the No 1 spot in the NY times list. Because normal readers have forgotten Martin and the fact that all his last five books in The Song of Ice and Fire have topped the NY times list. Fantasy enthusiasts have waited five years, sent him love letters which turned to hate letters which resulted in a petition when Martin failed to publish The Dance with Dragons last year after a five year wait. Yes, I signed it. Finally published, Martin began the book with a letter acknowledging the time he had taken and ended it saying, "The last one (A Feast of Crows) was a bitch. This one was three bitches and a bastard." So as you can see the fantasy world is wrought with emotion. So be prepared.

Ardent Martin fans have probably already read this book by now since it was published in September 2011, ergo this post will only interest newbies. Aaah...the lucky lucky newbies, so jealous. You have five books to relish and a whole world in front of you. A world of politics, magic, insane sex and fantastic plot lines awaits you.  George R R Martin has been hailed as the American Tolkien but there is much more to this book that fantasy. The characters will haunt you in your sleep. After the fourth book -apart from having possibly lost your job because you are so involved in reading, you might find yourself saying, "That bitch is worse than Cersei" or  "God, I wish I had dragons."

The book is based in Westeros, a land where winter lasts for an eternity and babies meet violent deaths. At the helm you have Robert Baratheon, ruler of the seven kingdoms and his queen, Cersei AKA the devils handmaiden. You have houses great and small and they are all vying for that elusive Iron throne. At the heart of it all is the family of The Starks at Winterfell. You see the world through many characters, but it's primarily through the eyes of the Stark children, five real ones and a bastard that are gifted direwolves. A poignant start. The Starks live a happy cold life until one day Robert waltzes into Winterfell and sets everything in motion. As you continue reading the series, Martin introduces you to worlds beyond Westeros and magic-always hving been only part of the Chorus line, begins to take center stage. The thing about Martin is that you want to take a voodoo doll to him sometimes since he kills people off without batting an eyelid, sometimes people you love. Often seems like it's only people you love. If you want to believe in Santa Claus, this book is not for you. His rationale is that it is unrealistic that only the people you hate die in a war. Everyone dies, sometimes the good die too. And because of that you're so emotionally committed that you sit there willing them to live. You find yourself saying, please don't take her away. I am yet to meet a writer as ruthless as Martin.

So newbie, if you're thinking "God she's is taking this personally", you are forgiven for being a normal reader. But that's ok. We like converting people. A true believer understands the sentiment, but you cannot call yourself a lover of fantasy if you have not read these books, so get cracking if you want to redeem yourself. Buy all the five books, sit in a corner and let Tyrion get into your head. While The Game of Thrones goes by like a breeze the sequels vary in action and have to be read patiently while you give up your job and sit in a corner. The Feast of Crows for instance will annoy you at times and reads like a historical novel. In reality, its a scene setting before A Dance with Dragons gets into action.

Even my fantasy hating fiance lapped it up like bowl of home made Sheera. But I have to say this, he couldn't continue. We win some, we lose others. All that matters is that you win more than you lose. This is a novel where the devil has his say and often even wins a few battles. Here's hoping he doesn't win the war but honestly with Martin, you never know.

And now I  patiently wait for The Winds of Winter .

Want all five? Buy A Game Of Thrones 5-Book Boxed Set from Flipkart.com

Just a taster? Buy A Game Of Thrones from Flipkart.com
Posted by Unknown at 5:42:00 PM