Movies based on Books | Never Let Me Go and The Shining

I don’t like watching movies based on books. But it’s different if they’re books I haven’t read yet. I recently watched two movies based on celebrated books and I can’t believe I’ve gone so far without reading them. The first one was The Shining, followed by Never Let Me Go. Needless to say, I watched the first one through the gap in my fingers, and wouldn't stop dabbing my eyes through the second. So my question is – now that I've already seen (more or less) how things unfurl in the movies, should I still bother with the books? 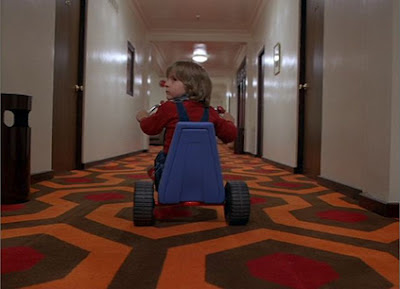 The Shining, directed by Stanley Kubrick, based on the novel by Stephen King
Talking about a movie based on a book you haven’t read isn’t the easiest or the wisest thing to do, especially when your blogging buddy is a huge Stephen King fan. Reshma did try to introduce me to the author a while ago with Duma Key, a book that I read with relish until I got distracted by something shiny (a piece of tin foil, in this case). Thing is, King is a brilliant writer who makes you see potential horror everywhere, but he isn’t a read you wrap up in-between work, play and rush hour. But that aside, I have no excuses for not watching The Shining. I got through The Exorcist and The Omen before I was 8 years old, and to have spent another 20 years addicted to the horror genre and not bothered with this is plain sad.

This move needs no introduction! As the caretaker, Jack Torrence moves his family into the Overlook Hotel during their winter break – 5 months – and things start to get spooky almost immediately. Jack becomes more short-tempered, his son Danny finds himself strangely drawn to a room he’s been told to stay away from and his wife Wendy is trying desperately to pick up all the pieces. Soon we realise that Jack is going a bit crazy and might do something horrible – like chop his wife and child to little pieces like a previous caretaker had in the 1970s.

You don’t often see a birds-eye view of scenic landscapes and snowcapped mountains set to a spine tingling soundtrack. Nor is it easy to imagine a river of blood emerging from an elevator, taking everything in its path with its flow. I’m thus going shelve the idea of buying this book for now, with Reshma’s blessing of course!
Buy The Shining DVD from Amazon here and Flipkart here. 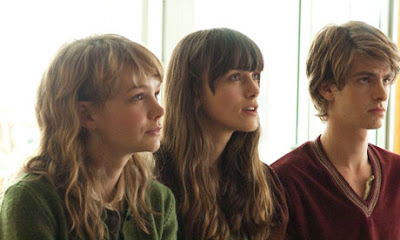 Never Let Me Go, British film directed by Mark Romanek, based on the novel by Kazuo Ishiguro
Kathy loves Tommy. Ruth steals Tommy. Tommy doesn’t know whom he loves but goes with the flow like an idiotic boy who’s got two attractive women fawning all over him. But the story isn’t about love lost and found. It’s about children who are bred to be organ donors when they’re old enough. Throw in couples who want nothing more than to get a deferral from making donations to be with each other, and you’ve got the perfect formula for water works.

I suspect the move isn’t half as good as the novel, a realisation that came to me in a scene where the 12-year-old Kathy is hugging a pillow and listening to a song called Never Let Me Go. She turns around and finds Ruth staring at her and the next thing she knows, Tommy’s taken. I don’t know. It feels like something is missing. Also, not once in the story do the Donors question their fate – if they’re living, breathing human beings capable of the same feats of human instinct and creativity as other children, why must they be harvested for their organs--no questions asked?
Must…know…more!!! So yes, I’ll buy this off Flipkart orAmazon at the earliest opportunity I get.
Posted by Afsha Khan Jayapal at 1:09:00 PM

Email ThisBlogThis!Share to TwitterShare to FacebookShare to Pinterest
Tags: Kazuo Ishiguro, Moves Based on Books, Never Let Me Go, Stephen King, The Shining