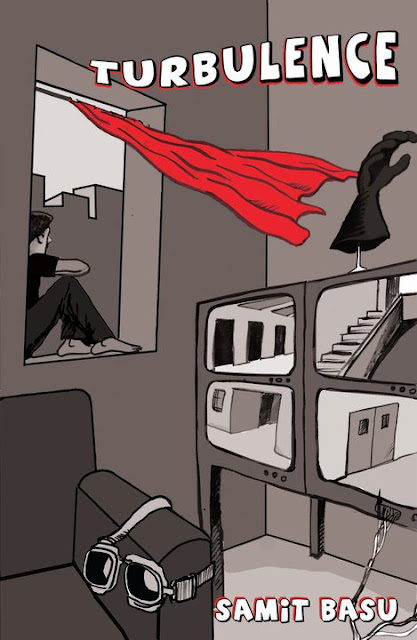 I once dreamed that I rode a wave to Sri Lanka. If I were a character in Samit Basu’s Turbulence, I wonder what my superpower would be. Amazing surfing skills I hope. Or the power to control natural disasters like tsunamis or earthquakes.

Sorry, I'm getting sidetracked. Turbulence is among the first Indian works in superhero fiction -- no, Indian Superman and Phantom do not count. Passengers on a flight from London to Delhi meet with turbulence, fall asleep and when they wake up – they have super powers related to what they dreamed. Like Vir, a fighter pilot with the Indian Air Force dreamed of flying and can thus fly; Aman a geek who dreamed of aliens and spaceships can access the whole world wide web – behind firewalls and everything – with his mind; Tia who never found time to do anything she loved, being busy and all playing the perfect mother, wife and daughter-in-law, can clone herself at will as many times as she fancies. And Uzma, an aspiring actress with sights set on Bollywood can charm her way out of anything.

It doesn’t take a whole lot of imagination to create any of these heroes and villains – the author admits time and again throughout the book – because they’ve always been done 10 times over. But it does take tact, skill and a whole lot of research to adapt them to Indian characters in a local setting. In that regard, Turbulence is a masterpiece and a well written one at that.

The language is good, the tone extremely witty and the details -- fight and flight sequences -- are vivid. Where the book lacks character is in its dialogue because it seemed awkward and forced. Like the telephone conversation between Aman and Vir in the beginning of the book which just doesn’t flow naturally. It’s like Basu put in a lot of effort to keep the conversation going. Also, in some cases I wish I could have read maybe a hint of an Indianism, twang or slang. But most of the time it’s all just so proper with correct sentences (who knew I’d miss this and complain in a review) that it’s tough to identify with any of the characters solely on speech and dialogue.

Nevertheless, Turbulence is one of those books I’ve keep on my bedside table, ready to open at a moment’s notice if a sequel were to be announced. It’s only prudent of Mr Basu to give us one. This was, after all, just a practice session and I have no doubt that there will be bigger and better to come in the subsequent chapters.