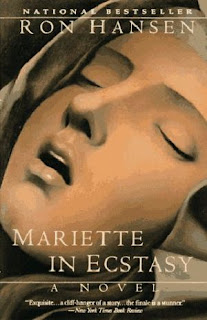 "Waterdrops from the night's dew haltingly creep down green reeds.

A rabbit skitters forward in the priest's garden and twitches a radish leaf with its nose before tearing it loose. Ears tilt as it hastily chews and settles over its paws."

We are instantly transported to a cold early morning in 1906 where The Sisters of the Crucifixion are getting ready to welcome their new postulant - Mariette Baptiste, into their sisterhood. From then on the story unravels like yarn off a knitted scarf as the sisters are torn apart by Mariette's love for Jesus and the resulting physical and mental manifestations of what seems like, at times an affliction and other times, ecstasy. The first chapter contains an invitation to the marriage of Jesus, Our lord and redeemer to Mariette Baptiste. To write anything more on the story would be giving it away. However those expecting a catholic version of Emanuelle, this is not that. While the title in itself might have a sexual overtone, ecstasy originally described the body in rapture or frenzy while the soul contemplated divine thoughts. Only later, in the 17th century, did Ecstasy take on a sexual meaning.

Ecstasy however seems to take the backseat to love as Ron Hansen draws you into their lives and your hours and days are guided by the invocation of their saints and songs. The 21st of October is to them the Mass of Saint Teresa of Avila, Virgin. Characters are drawn with cinematic precision. The prioress reminds you of the reverend mother in The Sound of Music. Suddenly you find yourself humming Climb Every Mountain. Mother Saint Raphael, a taskmaster that watches over a gaggle of five novices- sisters in training, and stares them into submission. For those of us who grew up with the movie, you cannot but imagine Maria as Mariette and wonder how the movie would have been if infused with nostalgia for a life lost and tension as they all compete for the love of one man.

Ron Hansen, said in an interview, that he wanted to give us an intimate glimpse into the secret life of sisters and their rhythmic existence that serves only one purpose, the worship of their lord. There are obvious complications that would rise from thirty women loving the same man. Somewhat similar to what Big Love - the HBO production, tried to achieve. He could have made it a soap opera with a large ending and I would have still loved it. But what got me was the restraint, almost as a mark of respect to the story and his characters. While miraculous events are showcased, they never become vulgar in their exhibition. This is possibly why the movie, made in 1996 to a screenplay also written by Hansen, was never released in the US. Any successful Hollywood version would have to be a parody of the book.

Mariette in Ecstasy begs to be read aloud. The delicious prose needs to coat your tongue. As I finished it I started reading selected passages again just to feel the words swirl around my mouth. A gem of a book.

Follow @rekrishnan
Buy Mariette In Ecstasy from Flipkart.com
Posted by Unknown at 7:54:00 PM