It’s all in the climax: Mercy by Jussi Adler-Olsen 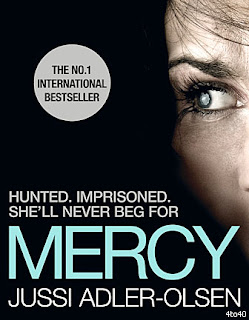 Detective fiction isn’t for everybody… to write that is. Agatha Christie had the ability to make her readers feel trapped, gasping for air while fighting to reason out the identity of the culprit. Sir Arthur Conan Doyle, well not so much. But he’s a rare exception where the period between crime committed and crime solved tends to be more exciting than the first and last chapters put together.
Christie and Conan Doyle are my favourite authors from the genre. But having devoured their tales long ago, I haven’t read any good detective fiction in quite some time. I thus decided to give Mercy by Jussi Adler-Olsen a chance because the synopses were so damn intriguing.
Merete Lynggaard, a charismatic politician is kidnapped and tortured like a prisoner of war in a mysterious room. Her only task: to answer why her perpetrators are doing this to her. Five years later, Carl Mørck, a police detective no one wants to work with, is made head of the “elite” Department Q. With a pile of old, unsolved crimes to work on, Lynggaard’s is the first cold case he picks up. Being the “best detective on the force”, he soon chances upon some blaring inconsistencies left behind by the original detective who worked on the case. Armed with his vast experience on the force, disdain for his fellow human beings and a dubious, but sharp middle-eastern assistant, he must uncover the truth before it’s too late.
The appeal of detective fiction lies in the climax. A spine chilling beginning and a heart racing middle amount to nothing if the end doesn’t leave the little hairs on the back of your neck tingling for days to come. Mercy comes close, more so because we uncover the truth 100 pages before it ends. What’s left is thus a riveting chase to catch the bad guys before they get away with it.
Mystery stories these days need to go beyond detectives with attitudes and sidekicks they love and hate in equal measure. What works for Mercy is that once you step over the threshold it’s impossible to put it down. The plots, sub-plots and the various characters we’re introduced to, not to mention Mørck’s investigative cunning, are completely fascinating.
But at the end of it, Jussi Adler-Olsen is just, erm, all right. This isn’t to criticise the author’s storytelling ability. I just believe that we have actually read and watched that many detective novels and movies.
You might buy this one, having chanced upon it the minute you walk into a store… that is, after all, where all the Bestsellers are handsomely stacked. Unfortunately, it just doesn’t leave you thrilled enough to track the author’s bibliography with as much interest as you might others.
Verdict: Best borrowed
Afsha’s Message: Ping me if you want to borrow my copy. We can talk in more detail then. Cheerio.