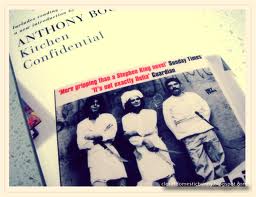 I could have read the Crest on the train to work, but halfway down the mucky stairs taking me to Platform 4 in Khar Station, I went, Naah!

I'm currently reading, devouring, more like, Kitchen Confidential, Adventures in the Culinary Underbelly by Anthory Bourdain. A detailed insight into why your body is an amusement park, among other things, the book's so honest you can't help but chuckle every time Bourdain proceeds to share insights featuring his younger and older selves who learned everything about life, in this case life being food, the hard way. But despite it's non-fiction status there's never a moment when you feel he's being too self-indulgent, as can be the case when someone's reliving their own life's journey to the top.

It may sound prejudiced, but I really enjoy Bourdain's description of vegetarians: Vegetarians are the enemy of everything good and decent in the human spirit, an affront to all I stand for, the pure enjoyment of food. Did you know that amoebas are transferred most often by handling raw vegetables? I would never have guessed, but I do find okra, with it's green, slightly hairy skin and oozing tubes mildly creepy. This isn't to say that veal eaters are holier than the vegetarian. Bourdain admits that most meats are, well, unhygienic. Ever been to a chicken farm? No. But I've seen those mobile vans transporting poultry to their impending doom and if the contents on my platter smell that bad before being plated then food in general has serious issues! 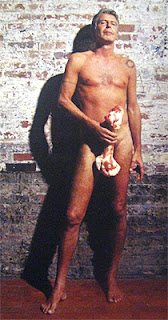 So you see, I love this man because he thinks that we can learn a lot about adjusting to strange, often badly handled (ever been to Dadar market or seen where the mutton man stores his meat?) food from Rasputin. This actually cracked me up. So Rasputin, that crazy, evil Russian priest couldn't be killed by several glasses of poisoned wine because he prepared for such an occurrence for years by consuming a tiny portion of arsenic with his breakfast. Sure, they got him in the end, but the thing to learn from him is never say no to food in all it's gory glory if you want to build your resistance up for the unknown. Of course, this doesn't mean you go nuts and eat fish on a Monday in New York (read book for more details).

Kitchen Confidential is a brilliant read for those who love and loathe Bourdain alike. It's well written and sounds just like his voice in your head. I'm only 75 pages in, mind you, on the first course. But honestly, I'm quite hoping that between now and tomorrow I will have gotten through the second and third courses and savoured some dessert in time to end my weekend for the section titled, quite aptly, Coffee and a Cigarette.

Bourdain recommends you don't eat before you read this book. But something about his style, adventures and overall authoritative tone of voice tells me I'm going to be hungry for more.

Kitchen Confidential is Afsha's introduction to the genre of food literature and she's personally told me that she's greedy for more. Any suggestions?