I really don't know how to start this blog post because of the progression of Rick Riordian's epic featuring demigods, wood nymphs, spirits and Gods who wear Hawaiian shorts in modern day America. But with the twelve Olympians as my witness, I swear on the River Styx to keep any spoilers out of the equation. 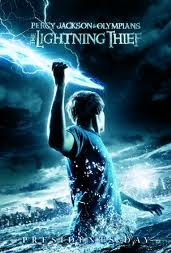 You probably remember that awful movie that released a few years ago -- Percy Jackson and the Lightning Thief. It's named after and based on the first book of Riordian's Percy Jackson series. I think the first mistake Hollywood made with the movie was introducing Percy as a 16-year-old teenager when in the book he's no older than a confused 12-year-old with ADD and an uncanny knack for getting himself into trouble. The pen-and-paper Percy is a likable kid who discovers that his father, the one he's never met, is actually Poseidon, God of the seas, effectively making him a demigod with some really cool powers. He also learns that there are several others like him at a place called Camp Half Blood in New York state and that Olympus has now shifted to America because the Gods just love migrating to wherever the centre of power may be. Childish, really. But cool if you have an active imagination. So you see, the pleasure of reading about Percy Jackson and his fellow demigods is to brereze through their adventurous and misadventurous quests, and watch them go from confused kids to somewhat less confused young adults.

This series has five titles -- The Lightning Thief, The Sea of Monsters, The Battle of the Labyrinth, The Titan's Curse and The Last Olympian. Through them, you get to revisit forgotten relics like the Golden Fleece, meet Zeus and Hermes in person, run from mythical monsters disguised as cheerleaders, and even ride with a group of Centaurs calling themselves Party Ponies. What I found most interesting about these books is that they introduce you to Greek mythology without subjecting you to thick volumes of dusty texts. It's the perfect educational tool -- fun, witty and filled with fascinating information.

Riordian is a prolific writer and though I've steered clear of his books for adults (Yes, I refuse to grow up!) and I really didn't enjoy The Kane Chronicles -- same concept as Percy, only adapted to Egyptian mythology. But I find his language most exciting to read. It's very American the way it relies on comebacks, slangs and catchphrases to make a somewhat tedious and intimidating subject identifiable. He actually makes me want to read The Illiad by Homer without cheating with literature guides and wikipedia.

The Percy Jackson series is an amazing present to receive no matter how old you are. It's fun, hilarious, entertaining and (be warned) super addictive. It also gives you an idea as to why films like Clash of the Titans and Immortals are such poor by-products spawned in drunken Hollywood basements.

To compare Percy to Harry Potter would be a sin because Rowling's little boy is in a league of his own. But if this were a competition I'd say that Percy Jackson was America's answer to Britain's fantastical pride and glory. Buy the box set if you know what's good for you. I promise you won't regret it.
Like The Caterpillar Cafe on Facebook