The Olympians Are Alive | The Lost Hero 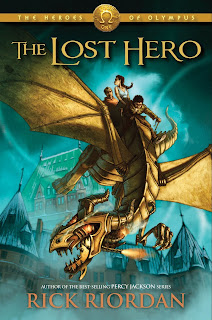 Heard of three demigods that take off from Camp Half Blood on a bronze dragon? Rick Riordan's The Heroes of Olympus, a follow up series to Percy Jackson, takes off to a promising start with the introduction of new heroes -- Leo, the fire-wielding son of Hephaestus, forge extraordinaire, Piper, daughter of Aphrodite who is a charm speaker known to 'borrow' BMWs and lawnmowers simply by asking, and Jason, son of Zeus/Jupiter who has a penchant for the gods in their Roman aspects rather than Greek. The bit about the gods in their Greek vs Roman avatars is a big twist in the tale we've been told so far. As for our favourite hero, Percy Jackson, son of the sea god, who took on Kronos himself when we last met him, all we're told is that he's lost. He went missing around the same time Jason, who has amnesia, showed up. But Riordian doesn't dwell on that for very long, because there's a new enemy stirring -- one more powerful, more terrible than the Titans who almost destroyed Olympus the previous summer.

While Annabeth, Grover and Tyson are off in different directions looking for Jackson, Piper, Jason and Leo answer the summons of queen of the gods, Hera. They set off on Festus the bronze dragon to rescue her before the children of the earth awaken and destroy Olympus at his ancient roots. Their adventures take them on a pan-American journey for thrilling encounters with Boreas, god of the North wind, Medea, a devious old soul brought back from the Underworld, cyclopes who love demigods dipped in salsa and Aeolus, master of the winds. They also meet and battle two giants, Enceladus, the bane of Athena and Porphyrion, king of the giants spurned to destroy Zeus.

But adventures aside, the book is rich in myth, legend and back-stories, one of the advantages of narrating in third person rather than first person. All we saw in the first five books was the world as Percy saw it. This time around, the narrative switches perspectives and we get to delve deeper into our three characters. Halfway through, we also finally understand that Riordian is bringing in a new parallel to spruce things up. There are plenty of instances of gods sporting two aspects, like a split personality -- Greek and Roman. The build up to the climax doesn't have you at the edge of your seat, debating whether our young heroes will defeat their enemies and save Hera. It's a nail biting, speed-reading adrenalin rush to find out who Jason actually is, where he comes from, why is it that he can recite the Great Prophecy in Latin. It's also a quest, so to speak, to find out the identities of the two other heroes (we know by now that Jason, Leo, Piper, Percy and Annabeth are the first five) who will become a part of the prophecy.

When the Percy Jackson series ended with The Last Olympian, I was sort of disappointed. But not as sad as when I read the last page of Harry Potter and the Deathly Hallows. I have gone back to JK Rowling's world of muggles and magic time and time again. But with Jackson, I didn't really bother, enthralling as it was. But the minute I got my hands on The Lost Hero, I knew I was done for. I have since read the five-book set again, in addition to the sequel to this series -- The Son of Neptune (a post about this coming soon as I grab a breather to hit publish) and don't plan on stopping there.

This has, after all, been in preparation of the third book of the series, The Mark of Athena which releases on October 2. I've pre-ordered it already and simply can...NOT... WAIT!

Background reading:
Demigods for Dummies on The Caterpillar Cafe
Camp Half Blood Wiki (a fan site for the series)
Myth&Mystery: Riordan's Official Blog (His favourite HP book is Prisoner of Azkaban)